The sale fares are available in all three classes, starting at₹1,299 for economy class, ₹1,999 for premium economy, and₹4,999 for business class, inclusive of taxes and fees, the airline mentioned on its website. The ₹1,299 fares are applicable on Jammu-Srinagar route.

Without divulging the total number of seats, the airline said, “This is a limited-inventory sale available on first-come-first-served basis. In case the seats under this sale are sold out, regular fares will appear.” 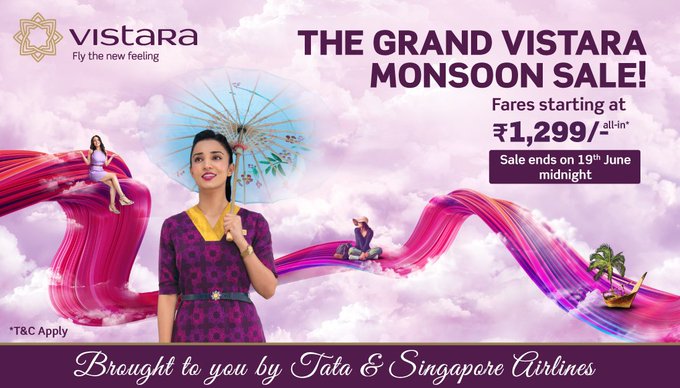 GoAir is also offering an attractive deal for flyers. The carrier is offering flight tickets for as low as ₹899 in the latest sale. Many popular destinations such as Goa, Kolkata and Bengaluru are covered under the recent sale.

Vistara and GoAir’s recent offers have come close on the heels of largest domestic carrier IndiGo launching similar deals. The low-cost carrier had last week put one million seats up for grabs with fares starting at ₹999 across its domestic network.

Vistara announced on Monday that it has added 62 new flights from the beginning of this month. All 62 new flights are operational as of June 18, said Vistara spokesperson. With the addition of 62 new flights, Vistara will now operate direct flights from Mumbai to 10 cities, adding Ahmedabad, Chandigarh, Chennai and Varanasi to the six other cities it already flies to from India’s commercial capital. The six cities are Amritsar, Bengaluru, Delhi, Goa, Hyderabad and Kolkata.

Air India will begin services on Mumbai-Patna-Amritsar and Mumbai-Nairobi routes from 27 September, Civil Aviation Minister Hardeep Singh Puri said on Monday. The minister also said that the national carrier will launch its operation on Delhi-Chennai-Bali route from 27 October. “I am delighted to announce that on the occasion of World Tourism Day on 27th Sept 2019, Air India will begin a direct Mumbai-Nairobi flight (4 days a week) to improve air connectivity between India & Kenya,” he said in a tweet.

Avoid making these 7 mistakes when you travel

Alexa, how can I fly to Mumbai?