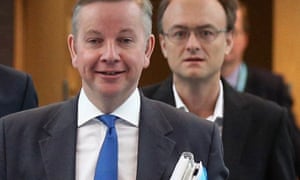 Once upon a time there was a Twitter account called @toryeducation. Now extinct for reasons that will become clear, it was in its day an aggressive player in the education policy debate raging around the former education secretary Michael Gove.

Widely believed to have been fuelled by Gove’s special advisers, it typified the modus operandi of the Department for Education at the time. The education secretary could be erudite and charming in person but his social media and off-the-record operations were pugilistic and at times personally abusive.

Critics’ vulnerabilities, including their mental health, were mocked and political colleagues were trashed. One was notoriously described as a “lazy, incompetent narcissist obsessed only with self-promotion” after he criticised the way the department was run. Opponents were put on the back foot – remember the stinging “enemies of promise” jibe – while pet projects were promoted.

Energy was soaked up in petty social media spats about policies that were not significant, obscuring those that were. Think of the time wasted arguing about the free school founded by Toby Young – I hold my hand up here – or the importance of blazers, ties and military discipline.

And it was effective (for a time). While we were busy playing their game, the political opposition was being slaughtered. Labour’s creditable education record was trashed and reinvented as a bloated, dumbed-down failure fuelled by the faddy ideologies of an education establishment, by then known as “the blob”, after a 1950s sci-fi film in which a gelatinous life form engulfs everything it touches.

In the end the @toryeducation account and its political leadership over-reached. The personal attacks on political opponents, critics and journalists went too far and official complaints were made.

The Conservative party was forced to disown the account, and officials at the DfE obliged to curtail its activities with a tacit admission that some of the people around the secretary of state were operating in breach of civil service codes.

Gove was sacked as education secretary amid reports the government was becoming toxic to teachers. His special advisers sloped off into temporary oblivion until the notorious and divisive Dominic Cummings was thrust back into the limelight during the referendum campaign, then portrayed by Benedict Cumberbatch on screen, before being catapulted once more into government to reprise his apparently formidable double act with Gove and achieve Brexit by 31 October.

But how successful were they? Strip out the propaganda, the seductive rhetoric and dirty tricks, and that period of education policy now looks flawed and wilfully careless with our children’s futures.

“Standards” (whatever that means) have continued to rise incrementally, as have the number of good and outstanding schools. But that is no different from Labour’s time in office.

Exams have become more difficult – and I applauded the coalition’s decision to weed out meaningless qualifications that fuelled insidious exam gaming – but the proportion of pupils getting the new 4+ is barely different from the percentage getting the old C+ because pass marks have been adjusted to ensure “stability”. This used to be known as grade inflation.

Nevertheless, according to the headteachers’ body ASCL, the new GCSEs are switching off swathes of lower-achieving pupils and disadvantaging those with special needs. Creative subjects are on the slide because of a focus on the EBacc and may soon become the preserve of the independent sector.

The stellar results of a few free schools are often used to justify Gove’s policies. But a few schools do not a system make and the system as a whole is vulnerable as never before.

School funding cuts, local government austerity, a demoralised workforce and not enough teachers mean the future of all those disadvantaged children Gove and Cummings were going to rescue from the “bigotry of soft expectations” is more fragile than ever.

According to the excellent Education in England annual report from the Education Policy Institute, there has been such a dramatic slowdown in closing the GCSE results gap between the best and worst-off children that it would now take 560 years to achieve. The report’s authors also see a real risk that we could soon see the gap starting to widen.

Meanwhile, the huge trap of time and energy known as mass academisation – a costly, inefficient policy experiment rammed through parliament (sound familiar?) through a process normally used for urgent terrorist matters – is failing to deliver enough school places. It has had minimal impact on performance and has allowed “orphan” schools no one wants, and off-rolled pupils who can disappear from a system in which local accountability has vanished.

This is the long-term effect of the Gove period, and we mustn’t be side-tracked again into fuming over current gimmicks such as powers to restrain pupils or the banning of mobile phones, when we should be closely scrutinising every detail about funding and teachers’ pay.

To cap it all, on every objective analysis the Brexit project to which Gove and Cummings are so recklessly wedded will make the country poorer, inevitably affecting public sector spending and further disadvantaging the worse off. It is Gove and Cummings who have turned out to be the “enemies of promise”. We can’t say we weren’t warned.